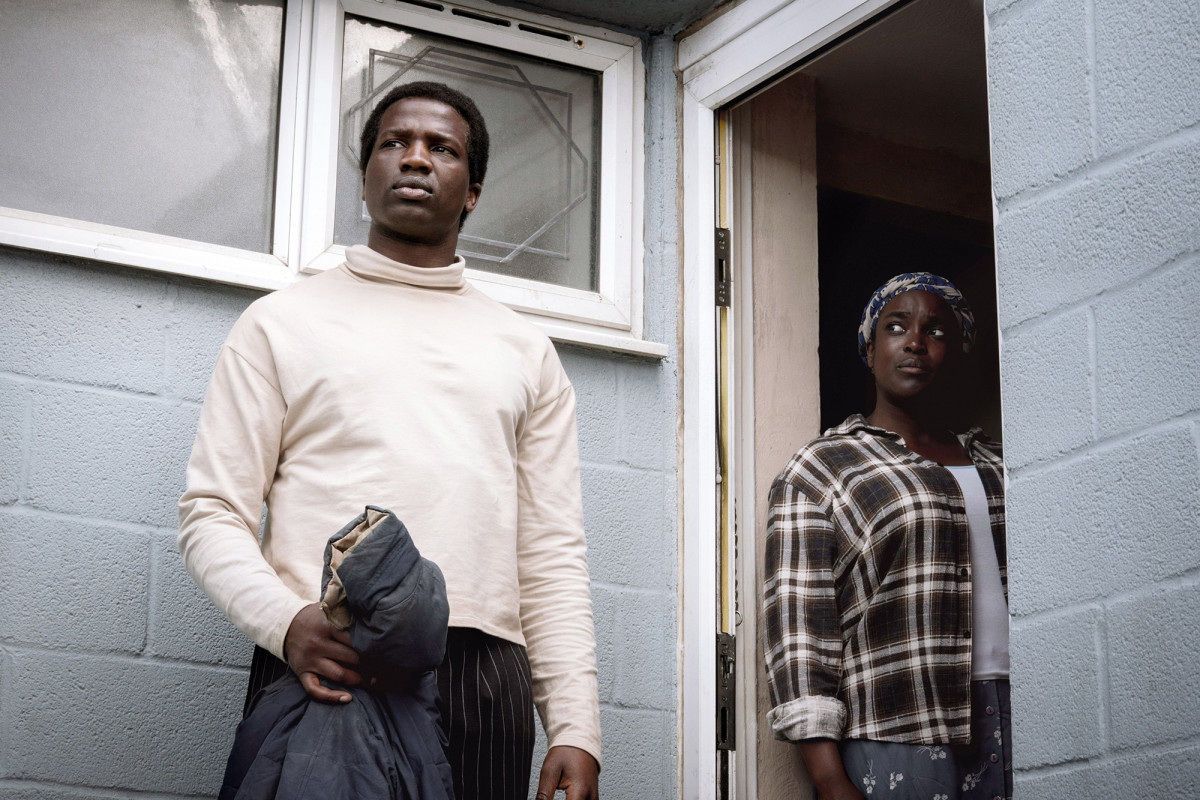 The haunted abode of “His House” is nothing like the ones we’re all so sick of: Bly Manor, Hill House, every single Ryan Murphy set.

The place is not sprawling or opulent. It’s a fairly average-looking home, tucked away in a low-income suburb in England, and its new residents are not yuppies, but husband-and-wife Sudanese refugees. For his debut, director/writer Remi Weekes took on the tough task of turning a very real crisis into a supremely entertaining horror film. That’s like a first-time baker choosing to whip up a croquembouche — but he’s done it.

Right away, there is something off about the couple, Bol (Sope Dirisu) and Rial (Wunmi Mosaku). When they’re released by British officials (including Matt Smith of “The Crown”) from a detention center and assigned a home on a probationary basis, Bol can barely hide his glee. Rial’s face, meanwhile, is cold and unmoved.

Even after they arrive to find the house is gross, with roach-covered pizza boxes and dirty walls, Bol still beams like it’s Disney World, and repeats that it’s “our home.” But something in the air — and the cruelty of locals — assures Rial they don’t belong. “I survive by belonging nowhere,” she tells her doctor after describing the deaths of all her friends.

Call it women’s intuition. Soon after they settle in, zombies from their gruesome past start appearing at night, lurking in darkness and tormenting the pair. Rial chalks it up to a Sudanese witch who has followed them to Britain, and is dishing out punishment. For what, though? Weekes, in his feature debut, reveals that vital piece of information in a flashback that’s one of the most shocking moments in any of this year’s movies. The scene isn’t gory, but morally bankrupt and incredibly human.

Not much of “His House” is traditionally terrifying, but there are horror hallmarks to be sure: ghouls popping out from shadows and a fair amount of bloodshed. Much more unsettling, though, is the paranoia and fears that come with leaving home for an inhospitable new country, and the cutthroat acts a war can make somebody do.

The witch’s magic conjures an emotional fantasy in one striking scene, in which Rial walks into a room to see all the women from back home smiling in colorful clothes. As she walks out, we see what actually happened to them. Harrowing stuff.

Weekes’ film plateaus somewhat in the middle, when immigration officials become wary of the couple’s odd behavior, such as destroying a wall with a hammer and telling them that the destruction was in an effort to kill a witch. However, it picks up again quickly with that jaw-dropping bit of backstory and sustains its momentum all the way through the intense final battle.

Throughout, Dirisu and Mosaku enliven a fascinating character study. How can you begrudge a man for wanting to start a new life after fleeing unimaginable violence and poverty? But you do, and then you don’t, and then you do. How do you blame a woman for being uncomfortable and scared in a country whose greatest pride is Britishness? Once again, these strong actors force us viewers to flip-flop constantly. Mosaku, in particular, has an acute understanding of trauma, and what we show and what we don’t.

And here I thought I was done with haunted houses.