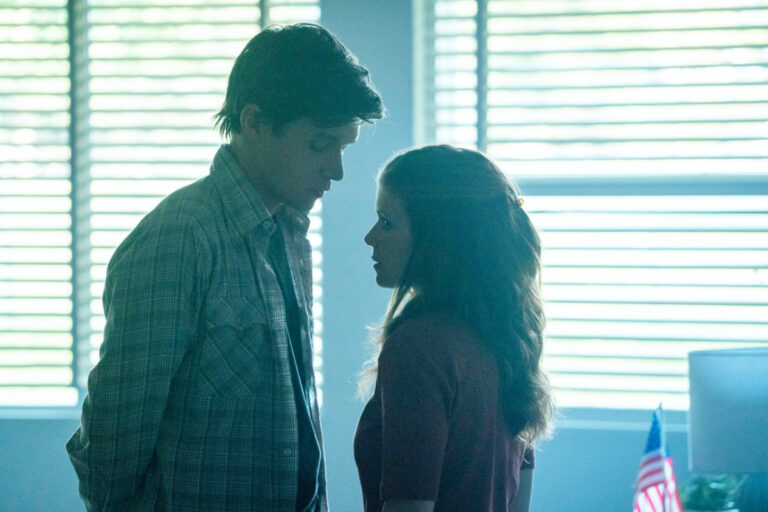 There’s little about A Teacher that should feel comfortable. FX on Hulu’s latest miniseries focuses on the relationship between a teacher and her underage high school student, and creator Hannah Fidell does everything possible to sell this romance. Yet it’s that grueling feeling of discomfort that makes this miniseries work. The resulting drama makes viewers complicit in A Teacher’s most horrendous crimes, while also examining our society’s sexualization of teenagers.

A Teacher starts with a story as scandalous as you might expect. The mid-20s Claire (Kate Mara) moves to a small town in Texas where she quickly becomes one of the favorite teachers at her new high school. That’s where she meets Eric (Nick Robinson), a popular senior with a sensitive streak. Immediately, the miniseries starts to build its relationship between its two leads. While Eric’s friends constantly joke about how hot their new English teacher is, Claire spends long moments frowning alone as she contemplates her failing marriage. Eric has dreams of a life bigger than high school, and the more time he spends with his teacher-turned-tutor Claire, the more possible those dreams seem to become.

Fidell wants viewers to pull for these two to get together, and it does a good job selling this romance. If Claire and Eric were more age appropriate and put in a different setting, they would make a good match. How many times have you seen the idealistic savior sweep the beaten-down married woman off of her feet? But A Teacher doesn’t exist in a different world; it exists in a world where a relationship between an adult and child is a crime. Though its characters may forget this, the series never does.

The series will premiere with three episodes before transitioning to a weekly release schedule, it’s a series that works best as a complete story. That’s because it’s only during the final episodes that viewers can understand the full damage of this seemingly sweet central relationship. As the show continues, the blissful romance of earlier episodes takes on a manipulative edge. Claire slowly morphs from being a damsel in distress to becoming an abuser in her own right, someone who yells at Eric when he texts her; but also expects him to be at her beck and call.

Through this metamorphosis, the series mirrors Eric’s own painful awakening about his first serious relationship — and realization that it constitutes not a relationship, but abuse. Yet more importantly, this gradual structure seeks to make the audience complicit in Claire’s grooming. Because the first episodes portray their budding romance so positively, it sometimes feels easy to forgive Claire for taking advantage of a minor. Even when she yells at Eric or cruelly dismisses his feelings, the romantic framing of their past makes the bitter present easier to ignore. It’s only during the back half of the season that the other shoe drops. With each episode, Claire becomes more manipulative, and Eric becomes more damaged. By the series’ end he’s a shell of the optimistic All-American boy who we first met in Episode 1.

No matter how much A Teacher sexualizes Eric, it still makes it clear that he was only a child when this relationship began. Hidden beneath his false confidence are layers upon layers of mental and emotional immaturity. Though Robinson is 25 in real life, his portrayal of Eric begs us to reconsider our treatment of teenagers. One of the most sexualized groups in all of the entertainment industry is emotionally closer to childhood, than adulthood. That reminder alone should make you feel uncomfortable when watching this drama — and potentially any relationship like it in the real world, going forward.

The first three episodes of A Teacher premiere on FX on Hulu Tuesday, November 10. New episodes will then be released weekly.

Watch A Teacher on FX on Hulu