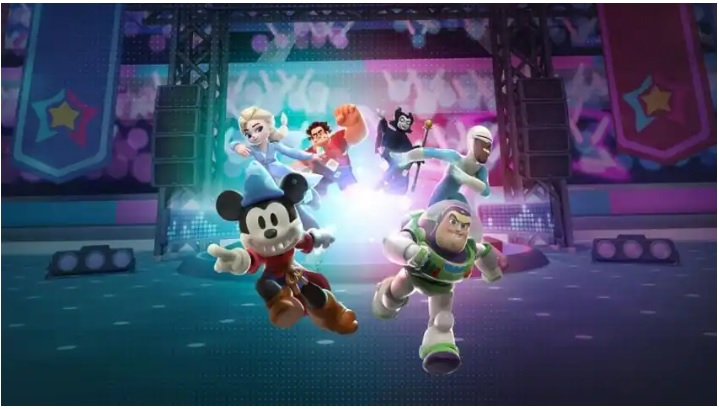 ‘Disney Melee Mania’, a brand-new 3v3 battle arena game is coming exclusively to the Apple Arcade very soon. The game will launch in December. The title features iconic characters from the Disney and Pixar classics. All these characters fight with each other for victory in 5-minute matches.

According to the Twitter feed and Apple press release, there will be more and more Disney and Pixar characters. It includes Elsa, Moana, and Buzz Lightyear fighting battling for glory in a quest for victory.

Players will be tossed into a virtual battleground housing a set of bases and objectives that they need to destroy or defend. This can be done by strategically timing your moves or quickly killing your enemies to gain upper hand. Doing so grants them points, which adds up throughout the game to reveal the final result.

The Gameplay is quite similar to Pokemon Unite. In the beginning, Disney Melee Mania will let you choose from 12 champions ranging from Buzz Lightyear, Mickey Mouse, Wreck-it Ralph, Moana, and more. Each character will have their own set of moves and unlockable cosmetics. They will battle it out in 3v3 matches that last merely five minutes.

Besides this, Players can also earn in-game rewards, take part in multiple game modes and challenges. They will even get access to more heroes in future updates.

“We’re thrilled to work with Disney to bring these beloved characters to the first-ever Disney and Pixar battle arena game, available exclusively on Apple Arcade”

“Fans will compete with arcade-style Disney and Pixar champions in a fun and frenzied all-out brawl to survive the chaotic melee and stay in the spotlight.”

Those who don’t know, Apple Arcade is a subscription-based gaming platform that houses over 200 mobile games for Apple iOS devices. It is available for Rs 99 per month with a one-month free trial. Customers, who have purchased a new iPhone, iPad, iPod touch, Mac, or Apple TV, will receive three months of Apple Arcade for free. It is also part of the Apple One Individual (Rs 195) and Family (Rs 365), monthly plans, with a one-month free trial.