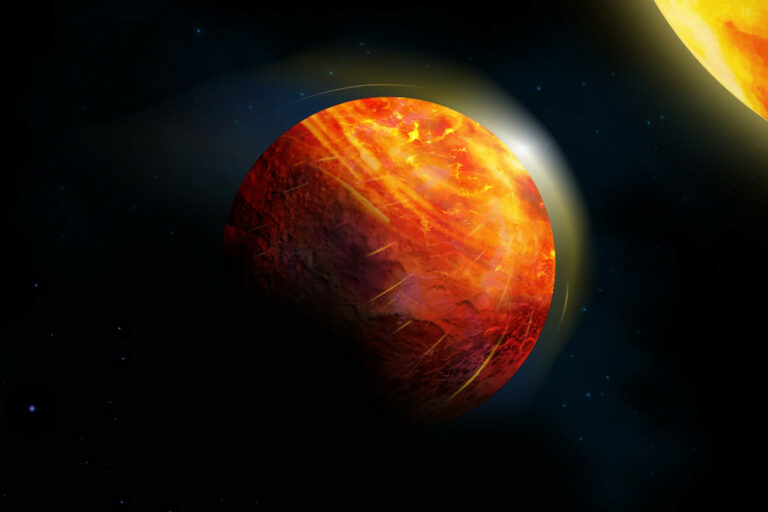 Astronomers have uncovered a hellscape planet that rains rocks, has deep lava oceans, and clocks winds of more than 3,000 mph.

The planet dubbed K2-141b exists more than 200 light-years away and is one of the “most extreme” ever discovered, according to a paper published Tuesday in the Monthly Notices of the Royal Astronomical Society.

Scientists said it is flanked by winds four times the speed of sound and has an ocean of lava more than 60 miles deep.

The planet also has temperatures that plunge on one side to negative 328 degrees Farenheight — so frigid that it can freeze nitrogen.

While the other part of the planet, temperatures rise to 5,432 degrees Farenheight, which is scorching enough to vaporize rock. Scientists said the extreme heat allows the rocks to precipitate as if they were particles of water.

Similar to Earth, the particles follow cycles in which they evaporate, rise into the atmosphere, condense and then come back as rain. But on K2-141b, the evaporated particles are pulled to the frigid side by supersonic winds — causing rocks to rain back down into the lava ocean, the Telegraph reported.

Scientists, however, said they predict that the mineral composition on the planet will change over time.

“All rocky planets, including Earth, started off as molten worlds but then rapidly cooled and solidified. Lava planets give us a rare glimpse at this stage of planetary evolution,” said one of the authors, McGill University Professor Nicolas Cowan.