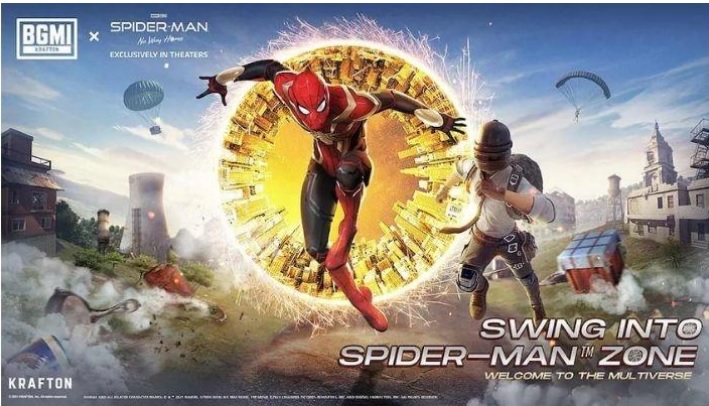 Battlegrounds Mobile India (BGMI) announces its partnership with Sony Pictures to bring special content from Spider-Man: No Way Home to the popular battle royale game. BGMI version 1.8 update will come to gamers later this month. As part of an upcoming update to the game, publisher Krafton will add special content to the game. BGMI announces its collaboration with Spider Man in December last year. The new in-game features are finally headed our way.

This collaboration will bring exclusive content to the game including special skins and a bunch of free items. Players require to complete in-game missions in order to claim these items. However, the developers don’t mention what kind of Spider-Man-themed missions will be included in the upcoming update.

Krafton added a new teaser on Facebook with the caption that reads:

“Swing into the Spider-Man zone. Welcome to the multiverse”.

This will suggest that Krafton will add a lot of new content based on the film when the update arrives for the BGMI later this month.

The Spider-Man: No Way Home collaboration is set to arrive on BGMI in “mid-January”. but the publisher is yet to provide an official launch date and other details.

BGMI is not the first multiplayer game that collaborates with the popular superhero after the launch of the movie. Before this, Epic Games added Spider-Man-themed content to its popular battle royale game Fortnite in December. It includes new Spider-Man-themed gliders, tools, emotes, etc. It also brought two premium skins for Spider-Man and MJ that were on sale in the in-game store.

Last year, Krafton added special content from Riot Games’ popular Arcane series on Netflix. That arrives with the  Battlegrounds Mobiles India 1.7 update. The update added characters, locations, and items from the League of Legends-based TV series, along with a new piggyback mode. The game also added a Mirror World mode, that allowed gamers to change their characters to Arcane’s Vi, Jinx, Jayce, or Caitlyn.