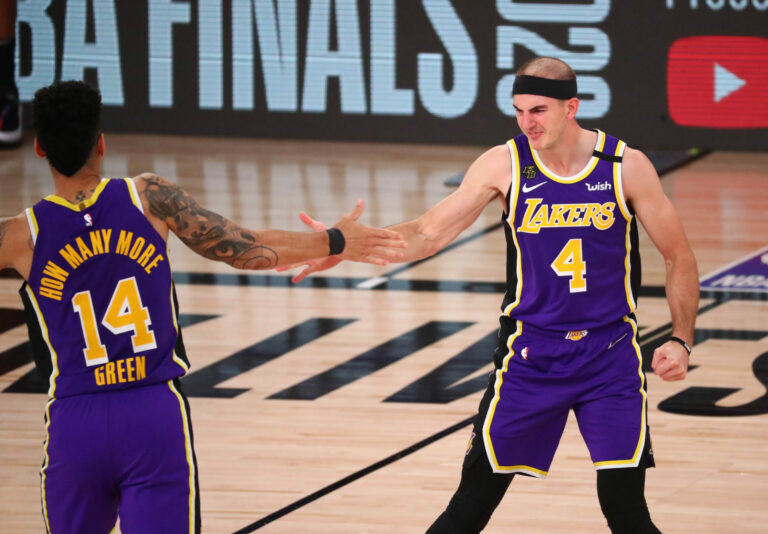 Alex Caruso had an interesting path to the NBA. A non-traditional college player, Caruso played all four years of college basketball with Texas A&M. After college, Caruso entered the NBA Draft in 2016 but went undrafted. Caruso signed with the Oklahoma City Thunder but got waived. He eventually signed with their G-League unit of OKC, the Oklahoma City Blues.

Caruso sat down with JJ Reddick for his podcast. The 2020 NBA Champion talked about how an interaction with OKC GM Sam Presti changed his outlook on the NBA. He said, “It made it really simple for me. A really big important timestamp for my career was when Sam Presti traveled with our OKC G-League team to Sioux Falls for two games. He traveled there, basically gave us an hour and a half in a small room with the whole team and staff. He opened up the floor to questions and said ‘Ask me anything you want’.”

Caruso relished the opportunity to learn from OKC GM Sam Presti and asked him questions. Speaking about the experience, Caruso said, “I didn’t know that was normal, but we’re going to take advantage of this. Everybody’s asking questions and then somebody asked a question like ‘what do you look for when you’re looking for a guy in the G-League to fill out your team?’”

Presti’s response to the question made Caruso think and gain perspective on what he could and couldn’t do. On Presti’s response, Caruso said, “One of the first things he said was ‘how many positions can you guard?’, ‘can you be a good teammate?’. And I was like ‘well, I can do the second one’. That’s easy, just be a good teammate and good person and hang out with the team.”

For Caruso, the short experience he had training with the OKC team allowed him to internalize Presti’s criteria for picking G-League players. He noted Russell Westbrook and Victor Oladipo as his blueprints for the point guard and shooting guard positions. He said:

Caruso used the information given by Presti to improve and get selected by an NBA Team and said, “I was like ‘okay I gotta go better.’ Just having that discussion where I understood what somebody in a front office of an NBA team is looking for. Once I got that information, I was just like ‘okay I know what I can do good, let’s just do better at the other stuff.’”

Caruso eventually improved and signed with the Los Angeles Lakers in 2017. Initially, while he was on a two-way contract, Caruso rarely got minutes. But improved performances in the 2018-19 season earned him his first full-time Lakers contract in 2019. He rewarded their faith in him by being a crucial defensive player in the Lakers’ 2020 NBA championship run.

Get notified about breaking news and watch highlights on the go; join the Arena on NBA Hoops