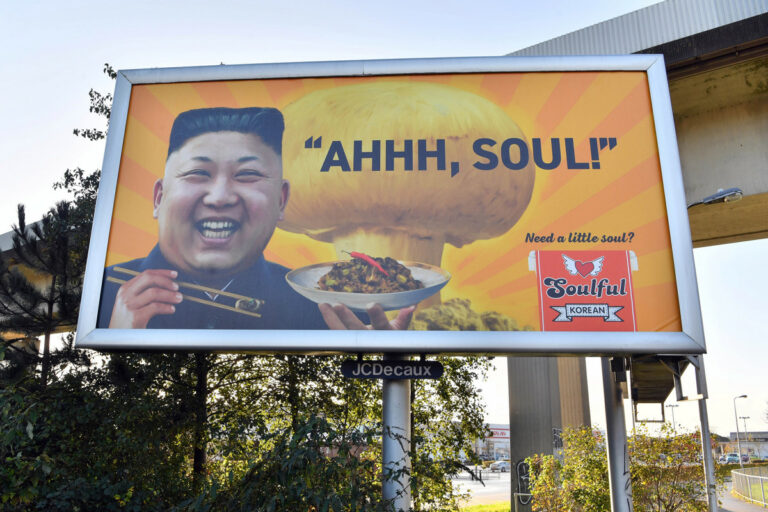 A giant billboard ad in Wales featuring a beaming Kim Jong Un exclaiming “Ahhh, Soul” will be torn down after passers-by described it as racist, according to a report.

The 50-foot ad on Newport Road in Cardiff by the Soulful Food Co. shows the North Korean despot using chopsticks to eat from a bowl with his comment printed to the side.

The phrase appears to be based on the words “Ah, so,” from the Japanese term ”ā sō,” which is used to show understanding but also is used to stereotype an east Asian accent, The Sun reported.

“I just want to know why Soulful Food Co thought such a racist ad would be a good idea in November 2020,” one said, according to Wales Online.

“How did it get to this point that NO ONE on your team recognized that this was racist?” another asked.

“Do you have any non-white people on it and what positions do they hold? Absolutely ridiculous.”

But not everyone took offense, with one person saying: “The best bit of advertising ever. All the reviews prove the point that people actually notice things especially when it is controversial for some people. I personally think it is brilliant and brightened up my day.”

The company is also behind billboards featuring President Trump holding a plate of food and a fork with the slogan: “Mexicans. I love ’em,” according to The Sun.

A company rep said: “We’re really sorry we’ve caused offense and realize we have made a misjudgment with this advert. Our intention was to highlight the world needs more soul right now, but we got the message wrong. We will be taking them down as soon as possible.”