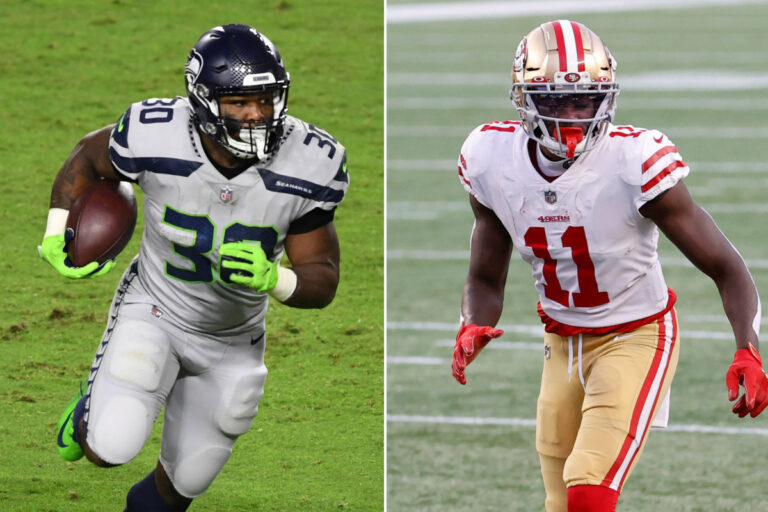 It’s Week 8 and it’s difficult to believe we are just under halfway through the fantasy football season in light of the uncertainty heading into the year.

The waiver wire will be especially busy this week, as managers scramble to find replacements for Odell Beckham Jr., who is out for the season, Chris Carson, who could miss time with a foot sprain, and any Cardinals, Broncos, Texans and Washington Football Team players, all of whom are on bye.

Below you will find players at each position who are all rostered in fewer than 50% of leagues that are worth targeting this week on the waiver wire..

Players are ranked by roster percentage on Yahoo and all fantasy points are calculated in half PPR scoring.

Bridgewater makes another appearance on the waiver wire pickups list this week and should be a top priority if you’re streaming quarterbacks. He completed 23 of 28 pass attempts for 254 yards and two touchdowns last week against the Saints. He will face an easier opponent in Week 8 against the Falcons, who are very exploitable on defense. Bridgewater should be a borderline QB1, especially with Kyler Murray and Deshaun Watson on bye.

After an underwhelming start to the season, Mayfield came out with a vengeance against the Bengals and tallied five total touchdowns. He completed 22 of 28 pass attempts for 297 yards and threw one interception, all without Beckham Jr., who tore his ACL on the first pass of the game. Beckham will miss the remainder of the season, but Mayfield has done fine in the past without him. He is a decent one-week rental at home against the Raiders this week.

Kelley saw more rushes than Justin Jackson on Sunday and finished with 12 attempts for 29 yards and five catches for 24 yards. It looks like this backfield is going to be an unfortunate timeshare until Austin Ekeler returns. That said, Kelley was dropped in a number of leagues and is worth a pickup if you are lean at the position, as both he and Jackson should be fringe RB3s moving forward.

Perine posted his first top-24 finish and was one of the bright spots for the Jets in their seventh straight loss. He split carries with Frank Gore and had 11 attempts for 39 yards and his first NFL touchdown. He also caught two of three passes for 16 yards. He should take over more carries as the season progresses and should be rostered in most 14-team leagues or deeper.

Hyde vaults into fantasy relevance after Carson, the lead running back, suffered a mid-foot sprain. The timetable for Carson is unknown at this time, but it’s likely he misses at least this week against San Francisco. Hyde should take over the leading role for Seattle while Carson is out and should be one of the top waiver priorities heading into Week 8.

Aiyuk just makes the cut at under 50 percent rostered, and for good reason. The rookie has had to step up with a plethora of injuries to the 49ers’ receiving corps, which continued into Week 7 with Deebo Samuel going down with a hamstring strain. Aiyuk finished with six catches for 115 yards in a tough matchup in New England, and gets Seattle’s porous secondary this week. He should be the top priority on waivers if available.

Shepard didn’t impress in his first two games and spent four weeks sidelined with turf toe, leading many managers to drop him. He returned in Week 7 and immediately made an impact on the struggling Giants offense. He led the team in receiving and reeled in six of eight targets for 59 yards and a touchdown, while Darius Slayton saw a season-low four targets. Shepard has flex value for the rest of the season, though he does have a tough matchup against the Buccaneers on deck.

Agholor has quietly emerged as a legitimate fantasy threat and the Raiders’ top receiver over the past few weeks. He has scored in three straight games and posted WR29, WR24 and WR10 finishes, catching five of nine passes for 107 yards in a tough matchup on Sunday against the Buccaneers. He will face a much easier opponent this week in Cleveland and offers flex upside for anyone who may need a bye week fill-in or additional depth at receiver.

Beckham is done for the season after he suffered a torn ACL in Sunday’s win over the Bengals. Next up on the depth chart — aside from Jarvis Landry (73 percent rostered) — is Rashard Higgins, who led the Browns in receiving in Week 7, catching all six targets for 110 yards. He clearly has chemistry with Mayfield and is the preferred choice of the Cleveland receivers on waivers.

Peoples-Jones is also worth considering as another Browns receiver who could benefit from Beckham’s absence. He caught three of three targets for 56 yards and a touchdown, but is only a deep-league dart throw.

Burton posted a top-three finish in Week 6 heading into the team’s Week 7 bye. He has chemistry with quarterback Philip Rivers and caught four of five targets for 58 yards and two touchdowns (including one rushing touchdown). He will be well-rested ahead of the Colts’ Week 8 matchup in Detroit as the team’s top tight end and should be rostered in most leagues at this point.

Rodgers assumed a larger role in Week 7 against the Giants with both Zach Ertz and Dallas Goedert sidelined. He caught six of eight passes for 85 yards, good enough for a TE6 finish for the week. Goedert is eligible for return from IR, but even if both play, the Eagles do like to use two tight ends and they have a very favorable matchup in Week 8 opposite Dallas’ hapless secondary.