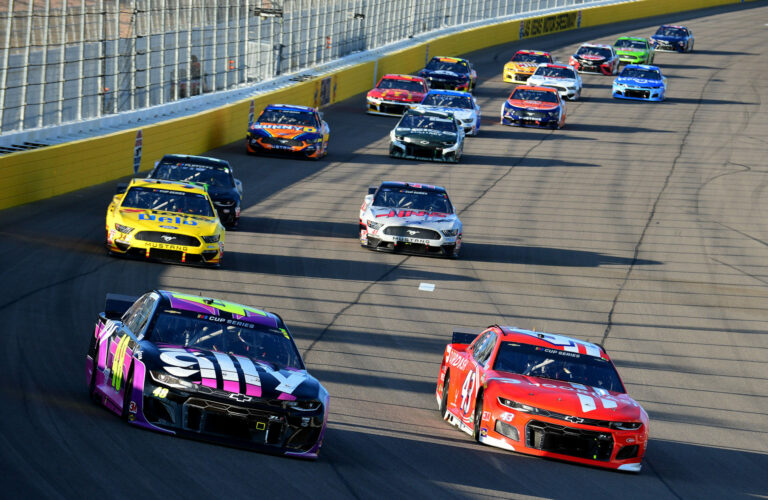 Early this year, the NASCAR community went wild after Denny Hamlin and Michael Jordan announced the arrival of a new team. The NBA legend was hugely invested in the sport and soon threw his hat in the ring. Before long, they recruited Bubba Wallace for the coming season.

Now, more details have emerged about the fledgling team, namely the team name and the racing number. Rather fittingly, the team has been christened, 23XI Racing, and the race number is #23, the same as Jordan’s jersey number.

Speaking about the team, Denny Hamlin said, “Michael and I have a shared vision for this team, so it’s exciting to see it reflected in the team name and on the race car with the iconic number 23 that Michael made famous.”

How did Michael Jordan and Denny Hamlin settle on this name?

According to reports, a company called 2311 Racing LLC sought to trademark the name 23XI Racing and the number 23. The source of the application came from ‘The Sacks Group’. Coincidentally, Michael Jordan is a client of the same company, so the odds were that the two were somehow related.

Here is the logo for the 23XI Racing team co-owned by Denny Hamlin and Michael Jordan: pic.twitter.com/bbIqGvKcst

Going into the specifics, 23XI seemingly incorporates Jordan’s jersey number and Denny Hamlin’s racing number. Since Hamlin is already racing with his #11 car, it would be odd to see his car number as part of a different team. Luckily, he seems to have found a way around that little obstacle.

Jordan even admitted, “At the end of the day, I want him [Bubba Wallace] to have his own identity. If he chooses to drive that number (23), great! If he chooses another number, that’s great as well.”

Obviously, both Michael Jordan and Denny Hamlin want the very best for a driver of Wallace’s caliber. Bubba Wallace has proven on a few occasions that he is perfectly capable of winning races. It is worth noting that Wallace could be potentially driving a Toyota, but it is all still rumor until 23XI clears the air.

For now, Denny Hamlin and Bubba Wallace are concentrating on wrapping up the 2020 season. The former is still in Playoff contention and eager to seal a berth in the Championship 4. Meanwhile, Bubba Wallace has nothing to lose in these next three races. However, he will be keen to end his Richard Petty Motorsports (RPM) stint on a high note.