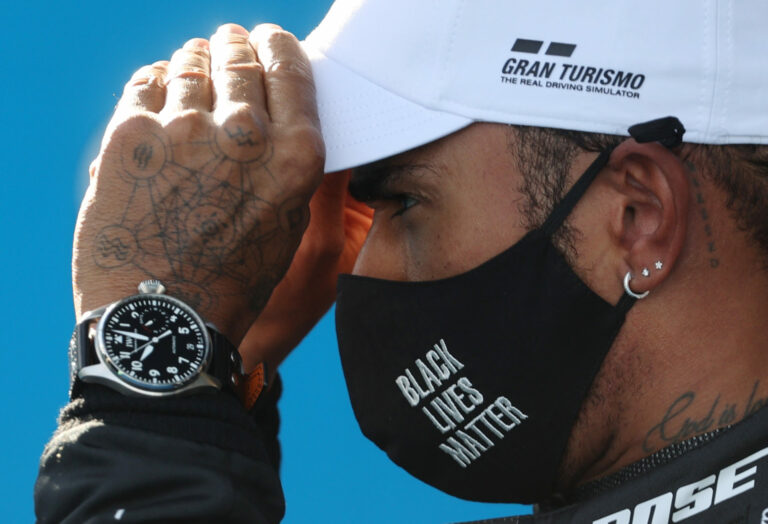 Mercedes start Lewis Hamilton is pretty bold when it comes to expressing his opinion. He supports the causes that he most feels for and is never a person who’ll do something for the sake of doing it. In essence, force can’t alter the way he thinks.

“I’m here because I want to be here. Because I love being here.”

This just goes on to show how much racing means to Hamilton. Closing on a 7th world title, having proved all that he has to, he could just call it a day (indeed , he alluded to that fact after the race). Yet, the love for the sport is what keeps him going.

The same was the case with the legendary Michael Schumacher. Having won 7 titles, he hung up his boots in 2006. But the lure of racing was to strong to resist for a man with F1 pumping in his veins. So he came back for another stint.

It shows the kind of mentality that these super successful drivers possess.

Further indication of a champion’s mentality can be seen in Hamilton’s other statements during the interview.

While the races may not suggest so. But Hamilton has certainly been put under immense pressure by teammate Valtteri Bottas in qualifying.

Although the stats may not reflect that, considering Bottas has been on pole only 4 times in 13 races, Hamilton has, more often that not, edged out his teammate by the barest of margins. This doesn’t satisfy the ever demanding nature of Lewis.

He said, “When I look back at those times, they were too close. They were not good enough because I believe that I have a certain amount of extra time in me.

“But it’s honestly, just never giving up, never believing it’s over. It’s down to feel, just pushing to the limit and trying to put all the pieces of a puzzle together in a rush.”

Hamilton’s next puzzle solving endeavours will be seen in Turkey. The Mercedes man only needs 18 points to seal his 7th Drivers’ Championship.

Can he equal Schumacher’s record next weekend? Or can his rivals throw a spanner in the works? We’ll find out on the 15th of November.