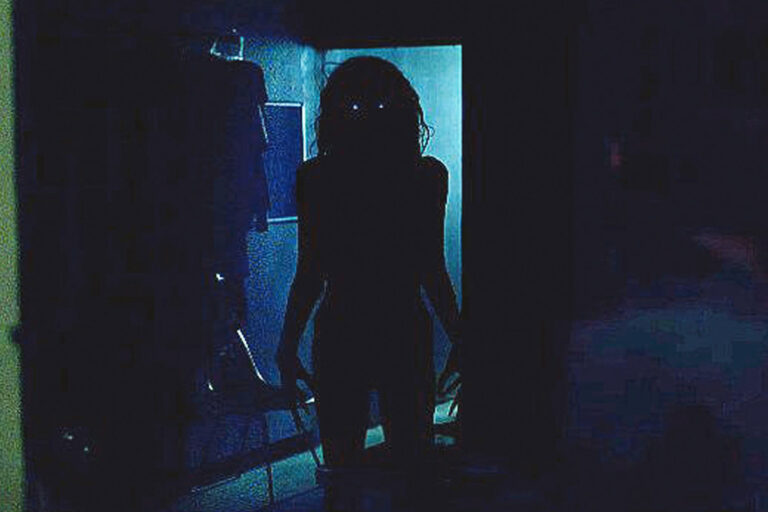 It’s an unspoken rule of horror: don’t show the monster. Some of the creepiest, most chilling, and most disturbing scary movies of all time have used this rule, choosing not to show the terror that lurks in the dark but instead let viewers’ imaginations fill in the spooky gaps. Yet few movies demonstrate the full range of this rule better than David F. Sandberg’s 2016 thriller Lights Out.

The first 10 minutes of Lights Out rate among the scariest in modern horror. Two people, Paul (Billy Burke) and Esther (Lotta Losten), are stuck working late at a textile factory. It’s in the shadows of a doorway that the silhouette of the monster first appears, a thin woman with talons for nails. Every time Esther turns on the lights, the mysterious woman disappears. When she turns them back off, there she is.

The creature repeats her disappearing act several more times during this first scene. When the motion sensitive lights in the factory are on, she can be seen squatting at the edge of the darkness. In these moments she rests on her haunches like the too real version of every child’s nighttime boogeyman. But it’s in the dark that she does the most damage. As the lights flicker on and off, the woman pops up closer and closer. Much like with Doctor Who’s beloved standalone episode “Blink” the terror comes from not what she can do but from where she could be and how inhumanely she moves through space, silently covering yards within milliseconds. Just watch the scene below and try not to be spooked:

Though parts of the monster are seen, you never fully see her. You have no idea what she wants, why she’s here, or where she comes from. You have even less of an idea about what she is. All that you know is that she’s out to kill and that in the darkness when you’re most vulnerable, she’s at her strongest. That’s terrifying.

Now compare that terror to what you later learn about the monster at the center of the rest of Lights Out. With every detail that monster, or Diana, loses her gravitas. She’s not a being created from pure horror. Instead she’s a super clingy friend with a skin condition who’s now a ghost. She’s not a demon of the night, but a figure purely drawn from one woman’s mental illness. As the movie explains multiple times Diana as a monster is almost completely avoidable. If any of the characters were to walk away from their mother Sophie (Maria Bello) Diana would disappear as well.

But it’s when you actually see more of Diana that the remaining dregs of her creepiness evaporate. During the brief moments when the screaming lead Rebecca (Teresa Palmer) shines a light on Diana, her skin shrivels and burns. The whole effect makes her look like a zombie from 1981’s The Evil Dead. Only instead of this character playing with the idea of camp and infusing horror with deranged comedy, Diana is supposed to be genuinely scary.

Just look at Diana in the basement. Yes, she looks gnarled and gross, but scary? She looks more like she needs to go to the ICU. Also, Diana? Really? That’s not a spooky name. Esther is much creepier.

That’s the fine line any horror movie has to walk. We want to be frightened by monsters and things that go bump in the night. But few scares can trump the specifically designed hell of our own imaginations, our own personal fears that we project into the darkness and place upon these creeps. For its first 10 minutes Lights Out excels at that balance. But the second it starts showing and explaining its central monster, all of that carefully crafted horror leaks out, leaving behind the shell of what could have been a truly terrifying monster flick.

Where to stream Lights Out