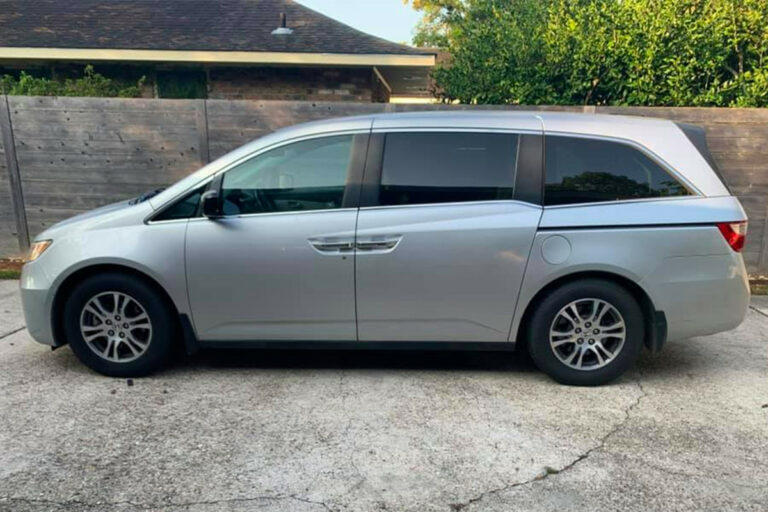 This ad’s laced with pro-van-ity.

A Louisiana dad proved that car commercials don’t need to be dull after posting an uproarious Facebook advertisement to sell his family minivan. The unorthodox ad has gone viral with more than 5,000 shares.

“This baby is in near ‘OK TO GREAT’ shape,” wrote Baton Rouge resident Patrick Fellows, who uploaded the self-effacing post Oct. 16.

In the farcical promo, he described his 2012 Honda Odyssey as the perfect car to “make your life an effing breeze, and you, a better person.”

Despite the hyperbole, Fellows is rather matter-of-fact when it comes to the car’s condition.

“She’s never been wrecked, has a few scratches but is no worse for wear,” he wrote, quipping that the “drivers seat doesn’t look like a long haul trucker has been smashing his sweaty a– on it for thousands of miles.” Not to mention that the used minivan has 110,000 miles on it with “new” tires that were installed 10,000 miles ago, per the post.

Not a soccer mom? No problem. The freelance auto-dealer offers male motorists the chance to “sack up and buy yourself a rolling man cave.” Meanwhile, “a fully functional DVD w/two sets of headphones, means you can watch Gladiator or Caddyshack or whatever the eff on your next trip to Disney,” Fellows wrote.

The so-called “slice of American (VIA JAPAN) Suburbia” runs potential customers $9,999. Or, as Fellows puts it, “enough to send your kid to Episcopal for another year!!”

And while Fellows is taking offers, he warns potential lowballers to tread lightly and that the final price must also end in “a 3, 7 or 9” — due to his “superstitions.”

Needless to say, his amusing advert made quite the impression on Facebook.

“Now this is how you sell a minivan,” added another.

One fan even asked if Fellows could write an advertisement for their car.

It’s unclear whether anyone has purchased the minivan yet.