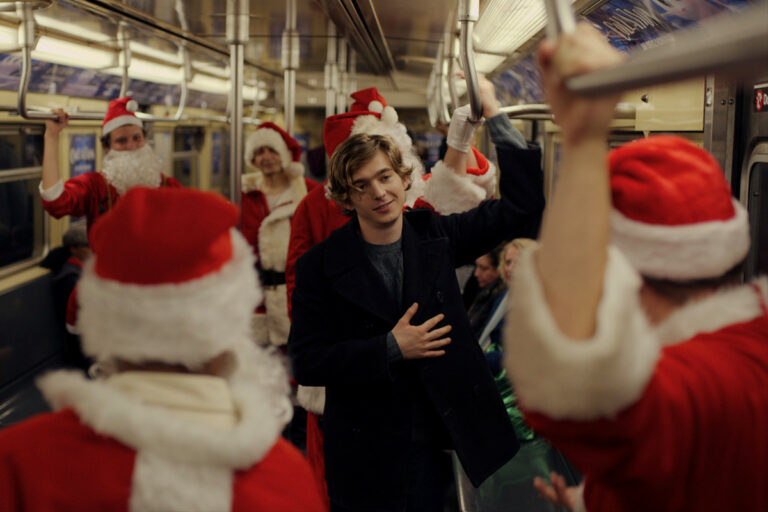 Dash & Lily takes place in New York City, where holiday season is in full swing. Santa is making dreams come true at Macy’s, the tree is lit up at Rockefeller Center, and a hopeful holiday romantic named Lily has placed a secret book on the shelves at The Strand, hoping someone special will find it. Dash, a cynical New Yorker, picks it up and begins playing Lily’s game, passing the journal back and forth and filling it with “dares, dreams, and desires.”

While they begin their relationship through the pages of a notebook, Dash confesses he wants more. “I really want to meet you,” he says in a voiceover in today’s trailer. “I think about you all the time.” But Lily has her own doubts. “What if I’m not the girl in his head?” she worries. “What if I ruin everything?” We don’t get to see their romantic reunion, but today’s trailer teases us with a cliffhanger. Dash bounds up the stairs to an apartment, rings the doorbell, and when it opens, he asks, “Lily?” The anticipation is killing us!

In a statement released with today’s trailer, Dash & Lily creator and executive producer Joe Tracz gave a shoutout to New York City, where the series was filmed, an addressed the coronavirus pandemic. “We shot Dash & Lily on location in the fall and winter of 2019, filming in so many of my favorite places, with no idea how different the city would look by the time we came out,” he said. “I miss that New York, but I’m grateful to be sharing this story with the world right now. Our series is a romantic comedy that (like Lily) is unapologetically hopeful, while (like Dash) acknowledging that it’s not always easy to believe.”

Dash & Lily premieres on Netflix Nov. 10. Watch the full trailer in the video above.