The Market Mail Every latest news update
Home News Streamin’ King: ‘The Shawshank Redemption,’ The Most Beloved Of All Stephen King Movies 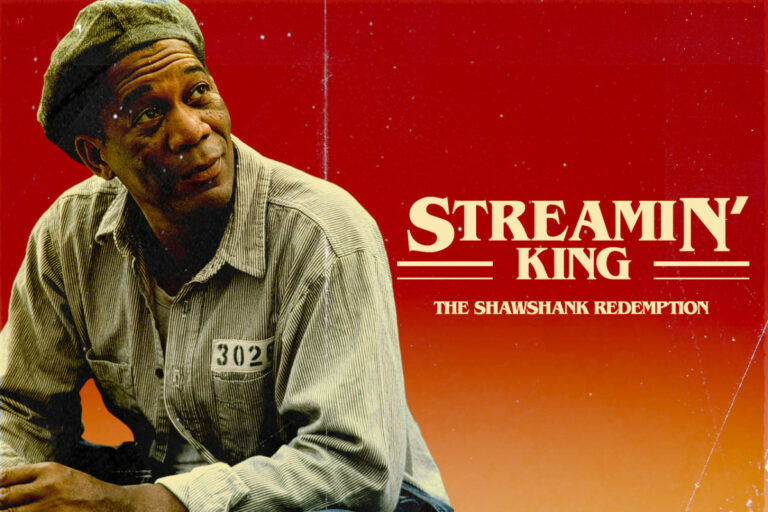 Streamin’ King is grave-digging through the myriad Stephen King adaptations available on streaming. This time we’re watching The Shawshank Redemption, the 1994 film based on the novella “Rita Hayworth and Shawshank Redemption” in 1982’s Different Seasons collection.

THE GIST: Maine “hotshot” banker Andy Dufresne (Tim Robbins) gets two life sentences in Shawshank State Prison when wrongfully convicted of shooting his wife and her lover. He befriends the resourceful Red (Morgan Freeman), who gives the tale its backbone by narrating two decades of their friendship and general goings-on behind bars, oppressed by a sociopathic warden and his vicious captain. Legendary twist ending.

PEDIGREE: Written and directed by Frank Darabont, who got his King start in ’84 with a short based on Night Shift‘s “The Woman in the Room,” called in a Vanity Fair retrospective on Shawshank “one of the few amateur short films based on his work that the author enjoyed.” Became an ordained titan of SK flicks in ’99 by impeccably porting The Green Mile to the screen; 2007’s faithful, bleak The Mist was gravy. Shawshank‘s stars both possess two Golden Globes and an Oscar (five Academy nods total for Freeman, two for Robbins). The most Oscar-nominated King adaptation with seven, though a staggering zero wins—including Best Picture (facing Pulp Fiction and victor Forrest Gump), Best Actor (Freeman lost to Hanks), Adapted Screenplay, and Original Score—with four total losses to the shrimp restaurant movie.

Cinematography by Roger Deakins (Green Mile, Hulu’s Castle Rock, a dozen Coen Bros. pics), nabbing his first of 13 Oscar nods (finally won two with Blade Runner 2049 and 1917). Score by Thomas Newman (1917, the last couple Bonds), earning his first of 15 Oscar noms (zero wins, can we please at least FedEx this guy his flowers). Major post-theatrical success, becoming the most-rented VHS the year after its release and one of television’s most consistently aired films ever—Gunton was still making “close to six figures [annually]” in 2004, and Warner Bros. execs noted in 2014 it’s “one of the top movies that drive much of their library’s value.”

WORTH WATCHING FOR CONSTANT READERS? Without a doubt. King adaptations get busy living or get busy dying based on the creators intimately understanding his peculiar essence as a storyteller and harnessing the tricky-to-pin-down ability to translate it. Cuts must always be made; assorted lines of dialogue are unforgivable to skip. Darabont turned a tight and chatty hundred-page first-person yarn into a two-hour, 22-minute experience that emulates Uncle Stevie’s narrative flow, quiet plotting, characterizations, emotions, and idiosyncratic x-factors so capably that the two permutations have nearly fused into one. (The same can be said of Stand by Me and “The Body,” from the same book as “Shawshank.”) Faithful down to its final lines, “I hope to see my friend and shake his hand. I hope the Pacific is as blue as it has been in my dreams. I hope.” The importance of this story to readers—one of the most readily shareable for friends who don’t do horror—is handled with proper care, a relief considering it’s touched untold numbers of viewers and introduced legions of them to the horror god’s vast range. Cool to see Norton go from an all-time King villain to an even more villainous all-time movie bad guy, and lovely to spend time with a film that cherishes books and learning.

WORTH WATCHING FOR KING NEWBIES/AGNOSTICS? 26 years later, still satisfying and attention-holding. Almost studiously formal, but the behind-the-camera magic (score and camerawork, firstly) polishes it into an astonishing gem that gives cinema history a handful of iconic scenes, among them the rooftop beers, opera break, and climax. The gallows humor, actors’ ease with each other, and tactile sensations behind those limiting walls pull you in gently and roughly at once. The feeling of genuine love and understanding between Red and Andy is still rare onscreen. “Few movie couples are as committed to each other as these two lost souls,” Variety reflected 20 years after its release. Freeman point blank in 2014: “To me it was a love affair. It was two men who really loved each other.” The rewatchability is immense—it’s shocking how many times the payoff and resolution can really nail you. By the time you’ve spent two hours with this score cradling you, even just watching Freeman walk along a rock wall becomes transcendent. Shawshank‘s also the birthplace of his profound voiceover career, spawning parodies and imitations galore, March of the Penguins, navigational assistance via Waze, a 2020 narration gig on a 21 Savage/Metro Boomin album, and these:

Less complimentary notes: a grand total of two women have blink-and-miss-em speaking roles, and the premise of a bunch of guys in a nostalgia-draped prison rife with rape and corruption can be off-putting. In actual American life in 2020 and beyond, cop shows have soured for many, and an aversion to prison fables is just as understandable—the carceral state is a society-ravaging cancer, not a heartwarming backdrop for triumph. It’s been reduced to a trivia footnote that the Ohio State Reformatory, the filming stand-in for Shawshank, had been shut down for inhumane conditions; ex-inmates shared experiences that echoed King’s story “in terms of the violence of the guards and throwing people off the top of cellblocks.”

It’s also puzzling the cast is this white in an American prison movie. In the film’s 1947-66 timeline in Maine, okay: 1950 saw 427 white prisoners enter institutions and only seven Black prisoners; in ’64 the numbers were almost identical. But nationwide, inmates hovered around 70 percent white, 30 percent Black in those years. (Data via U.S. DOJ.) Whether the relative local accuracy was intentional or a byproduct of showbusiness’s racial gatekeeping, knowing our modern prison industrial travesty was fully in place and view in the ‘90s, it feels like unnecessary, irresponsible erasure of our disproportionately Black prison population.

CRITICAL CONSENSUS: Notably the No. 1-rated movie on IMDb with a 9.2 average from a staggering 2.3 million user votes, sitting above the first two Godfathers and The Dark Knight. (Darabont’s Green Mile is No. 28 with an 8.5.) Holds a 90 on the Tomatometer but became critic-proof long ago, as anecdotally but decisively proven in 2014 by Freeman (“About everywhere you go, people say, ‘The Shawshank Redemption—greatest movie I ever saw.’ Just comes out of them”) and Robbins (“I swear to God, all over the world—all over the world—wherever I go, there are people who say, ‘That movie changed my life.’ … When I met [Nelson Mandela], he talked about loving Shawshank”).

BIBLIOGRAPHICAL CONTEXT FOR “RITA HAYWORTH AND SHAWSHANK REDEMPTION” (1982): Opens Different Seasons, a four-novella collection whose format he duplicated three times, most recently with 2020’s If It Bleeds. Written “immediately after” completing the ’79-published Dead Zone, with SK saying in Seasons’ afterword “it’s as if I’ve always finished the big job with just enough gas left in the tank to blow off one good-sized novella.” Arrived in the middle of a superhumanly productive streak of just over two and a half years that yielded Pet Sematary, Cujo, Christine, Cycle of the Werewolf, Bachman books Roadwork and The Running Man, and his first forays in screenwriting (Creepshow), nonfiction (Danse Macabre), and The Dark Tower (The Gunslinger).

Zach Dionne is a writer and editor in Chapel Hill, North Carolina who has hope.

Where to watch The Shawshank Redemption