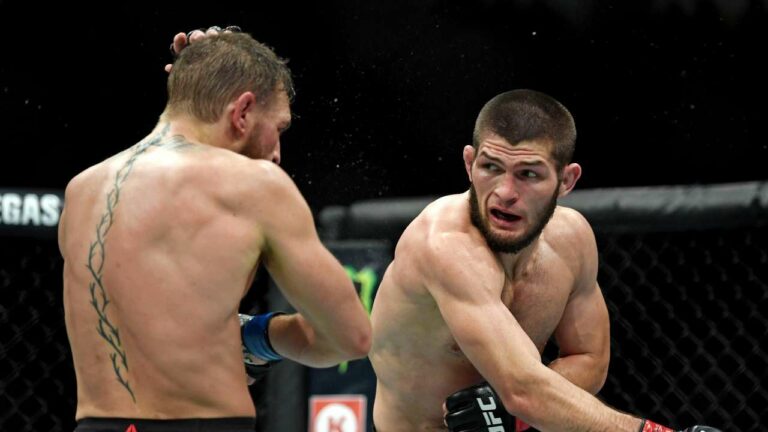 Khabib Nurmagomedov and Daniel Cormier are the MMA bromance that everyone loves to watch. The AKA training partners have a fantastic relationship, helping each other through their careers. Out of all the non-Dagestani fighters in the UFC, Khabib is probably the closest to DC. A lot of this is also because of the time they spent working directly with each other and Coach Javier Mendez.

Both men are wrestling specialists, but have shown more than competent standing technique. Khabib, in particular, has a very effective short jab which helps maintain distance between him and his opponents. DC jokingly claimed that he was the one who taught Khabib the jab, before admitting that all credit should go to Javier Mendez.

So who taught @TeamKhabib Nurmagomedov his trademark jab? Well, Daniel Cormier (@dc_mma) says it was most certainly him.

“I taught him the jab. That’s my jab. We used to just stand there and try to punch each other in the face with a jab. ‘Oo that’s a jab DC’, ‘yeah you got me with that one’. We just constantly keep throwing the jabs.

“Javier, actually. Javier showed it to him.”

Khabib Nurmagomedov and his underrated striking

Khabib Nurmagomedov may be a wrestler, but his striking doesn’t leave him high and dry. He is a very efficient striker, using his strikes as disguises for his takedowns. As most of Khabib’s opponents brace themselves for takedowns, Khabib pops in and out with punches before going for takedowns. The routine may be familiar but is nevertheless unstoppable.

Dana White came out recently and defended Khabib’s striking. We have seen countless examples of Khabib having the ability to throw. The most notable punch has to be the one that dropped Conor McGregor when they fought at UFC 229. What was even impressive was that Conor didn’t drop Khabib, despite being the striking specialist.

Even at the UFC pre-fight conference, Khabib felt the need to remind the media that his jab is strong. Just because his preferred area of fighting is on the ground doesn’t mean that Khabib is a slouch on the feet. While he can’t stand and bang with the elite strikers for five rounds, he is more than capable of bringing them down and dominating them from top position.