VIDEO: When Anderson Silva Was Included in a Song by Rap Sensation EMINEM 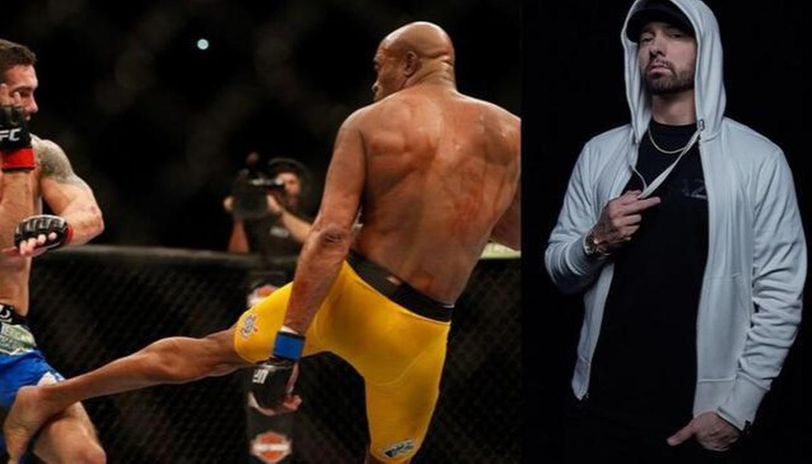 Anderson Silva is one of the most recognizable faces in MMA. The Brazilian superstar is a pioneer in the sport. He was one of the biggest stars in the early days of the UFC and helped grow the sport tremendously. At the height of his career, ‘The Spider’ was not only one of the biggest fighters in MMA but in sport.

As with most athletes that achieve a certain level of stardom, opportunities come thick and fast. Be it movies, or talk shows, or podcasts Silva was seen everywhere. However, his legacy is such that even in 2018, when he was no more a champion or in his prime, his name was used in a rap song.

Read: “I need to say thank you to Vitor”- Anderson Silva grateful for rivalry with Vitor Belfort

Anderson Silva referenced by EMINEM as a source of inspiration

Many observers consider Marshall Mathers a.k.a. EMINEM as one of the greatest rappers ever. The American hip-hop artist often takes inspiration from real-life incidents and uses them in his verses. Mathers is no stranger to referencing celebrities in his song, either in a positive light or to slander them.

This time around he used MMA legend Anderson Silva’s name in a positive light, in the song titled ‘Caterpillar’ by Royce da 5’9 featuring EMINEM and King Green. The verse by EMINEM goes,

“Don’t tell me when I’m supposed to rap until

Especially when your favorite rapper isn’t even half as ill

A savage still, the tracks a banana peel, attack of the silverback gorilla

You’re havin’ a little trouble fathomin’ this is actually happenin’

Like Anderson Silva when he snapped his shin in half

And then had s**t hangin’ by a flap of skin

In the rematch, Silva suffered one of the most horrific injuries witnessed in the sport. Here, ‘The Spider’ attempted to throw a leg kick which was perfectly checked by the ‘All American’. Consequently, Silva’s leg clashed against Weidman’s knee at full force.

His shin shattered in half and his leg was seen hanging in a truly gruesome image that most fans will never forget even years after the fight took place. Furthermore, it took ‘The Spider’ over a year to return from the injury. His comeback fight was against an extremely dangerous opponent in Nick Diaz.

The spirit to keep fighting and make a strong comeback after a potentially career-ending injury is one of the main reasons why fans love Anderson.

One of the greatest artists ever referencing the event many years after it took place reveals what a shock the incident was to most people. It showed that the legacy left by ‘The Spider’ remains relevant even to this day. How well do you remember the song or the injury that inspired it?

What Makes Online Roulette So Popular in Malaysia?